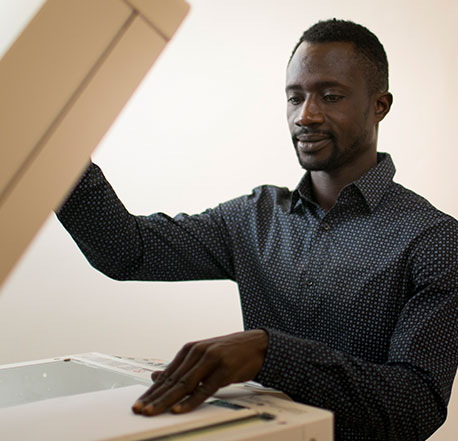 A piece of Bavaria in Senegal

Hi, my name is Mame S. and I come from Senegal. I lived for several years in Europe, even in Germany, but then I returned to my home country. I've kept my interest in Germany, and I now work as a technician in "Bavaria House" in Thiès, to the east of Senegal's capital Dakar.

I reached Germany in 2015 via Spain and Belgium. At that time, I absolutely wanted to find work and also learn languages. That was what drove me. So I was truly shocked when my application for asylum in Germany was declined. I was supposed to return to Belgium because I had previously applied for asylum there; those are the terms of the European Union's Dublin Treaty. But I didn't want to do that, and preferred to go back to Senegal. My hope was to travel to Germany again later on, since I had a chance of a training position in Munich. Nevertheless, I was not granted a visa.

So I worked in Senegal as a travel guide for tourism companies. This led to me meeting some Germans, who drew my attention to the "German-Senegalese Centre for Jobs, Migration and Reintegration". This little tip changed the course of my life once again. You see, that's where I received advice about my career opportunities in Senegal. And this then actually resulted in me finding a job as a technician in Bavaria House in Thiès. It opened in 2018. Bavaria House is where young people can attend training courses to make them better qualified for the job market or to smooth their path to independence. It was established through a collaboration between GIZ and the German state of Bavaria. Exactly what appeals to me! Because Bavaria has come to my homeland: the blue and white flag is flying in front of my workplace.

'I received training as a technician at "Bavaria House" in my homeland – and later a job!
Mame S., Senegal