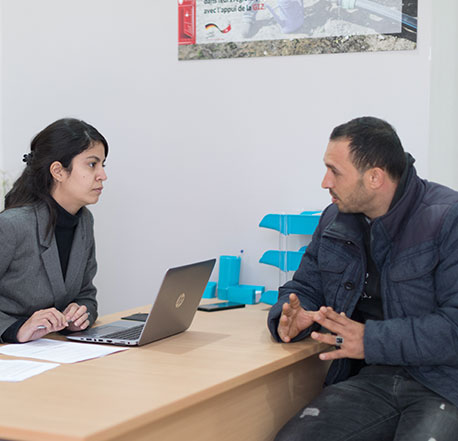 Hi, I'm Khaled. I’m 34 and I come from Tunisia. My family owns a fruit and vegetable outlet where I worked for a long time. But it was always my great dream to live in Europe. I made my way there in 2008 when I was 24 years old. Initially I spent a year in Italy. Then I travelled to Germany via France and Belgium.

I had good times. I fell in love with a German woman and after 5 years we got married in 2014. But although I learned German, it was incredibly difficult to find a job. And by 2017 my marriage had also failed. I lost my residence permit due to our divorce. I had to leave Germany.

So after almost 10 years I was back where I came from. Many things were as usual. But there was also something new: the "German-Tunisian Centre for Jobs, Migration and Reintegration", CTA for short. The Centre's staff advise people like me who want to make a fresh start in Tunisia. They had an unusual idea for me – I could become a beekeeper!

And that's exactly what I'm doing now, training to be a beekeeper. Of course I am also back with my family and help in their business. I deliver the goods with my own truck. In future I'd like to do this with my own products: my objective is to be an independent beekeeper and supply local supermarkets and greengrocers with my own honey.

"I'd like to be an independent beekeeper and supply local supermarkets and greengrocers with my own honey."
Khaled, Tunisia